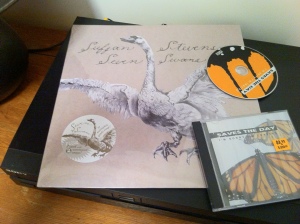 I rediscovered a band this morning after hearing one of their songs on an indie movie soundtrack and decided to listen to the entire album that the song was on. I had only listened to a small handful of their songs over the years and had relegated them to “good for chill playlists” status. But, this morning, as I was four songs into “Onigara” by Great Lake Swimmers, I realized what a stunningly beautiful, if understated, album it was, and how like so many of us, I have slipped unwittingly into an ADD-style habit of listening to scattered songs or even just parts of songs by a variety of artists instead of savoring one artist’s album as a whole.

Spotify and Pandora are the norm these days for music listening, and during the past year, I made the switch from actually buying music on itunes to just streaming on spottily for several reasons. It’s cheaper, it gives me instant access to a much wider array of music than itunes or shopping at a record store would (do those even exist anymore?? That’s a whole separate article.), and it’s a social network where I can see what my friends and colleagues are listening to. This relatively new style of music networking has served both personal and professional purposes for me, helping me not only to find new bands to listen to for my own personal pleasure that I might otherwise have never heard of, but also to create playlists for my yoga and fitness classes with more ease.

Instant access to a wide variety of songs and the ability to see a running ticker of songs that everyone who I “follow” is currently listening to has definitely led me to pause a song or album part way through just to hear and maybe “star” a song that I saw. Which then leads me to look up similar artists, star some of their songs, find more similar artists, etc. until I forget that I was in the middle of listening to an album. I’m finding that this instant gratification culture of music listening we’ve embraced has lessened the sacred art of sitting down to listen to an album, and it makes me sad and nostalgic for the days of CDs and liner notes.

About ten years ago, when iPods and iTunes were becoming the norm in the music world and people were slowly shifting away from buying physical copies of albums at stores, I vowed that I would never stop my weekly ritual of going to Newbury Comics on Tuesday to look at all the new releases, browse through all the used CDs, and spend way too much money on music. Several years later, when I began to amass a collection of more chill/instrumental music and hip hop for the purposes of teaching yoga to music (yes, I teach yoga to hip hop…sometimes), I slowly shifted toward downloading more songs and albums on iTunes because it was more convenient and I did not necessarily want to buy a whole album of songs by artists like Slow Dancing Society or (god forbid) Pitbull. When I shifted to teaching yoga full time, I stopped buying CDs altogether, and it seemed like by that point, almost all the indie record stores had gone out of business and even the bigger retailers were phasing out CDs.

I still get just as excited when my favorite bands release new albums, and once in a while if a band offers a prerelease album/merch combo sale, I will wholeheartedly support them and buy their physical CD and leaf through the liner notes, reading all the lyrics as I listen, just as I did in my high school days. But now that I’m older and busier with a career that has me constantly on the move, I simply don’t have as much time as I used to to sit down and listen to albums in their entirety. And now that information travels so much faster and we’re exposed to so much more of it in an “on demand” fashion, many avid music fans probably find themselves in the same boat.

Despite these shifts in the world of music, I still value the (lost?) art of listening to an album by an artist I love, without skipping any songs. The days of buying records and CDs may (sadly) be over, but now when I get a notification from Spottily that one of the bands I follow has released a new album, I still get as giddy with excitement as I did when I would see the “upcoming releases” listed on the record store’s chalkboard. And even though playlists and artist radio stations have replaced albums for many listeners, I still sit and listen to my favorite artists’ albums in their entirety. It is and will always continue to be something sacred, at least for this music lover.

2 thoughts on “The Lost Art of Listening to An Album”